In this case study we'll show you how AGCO, one of the world's leading manufacturers of agricultural machinery, used Visual Components to model complex production equipment and workflows as a digital twin, resulting in optimized production cells, improved processes, and simulated improved workflows.

“In the past we had to try to reach a common consensus with many on-site meetings, elaborate presentations, and detailed descriptions. Visual Components makes it much easier for us to communicate with international equipment manufacturers.” 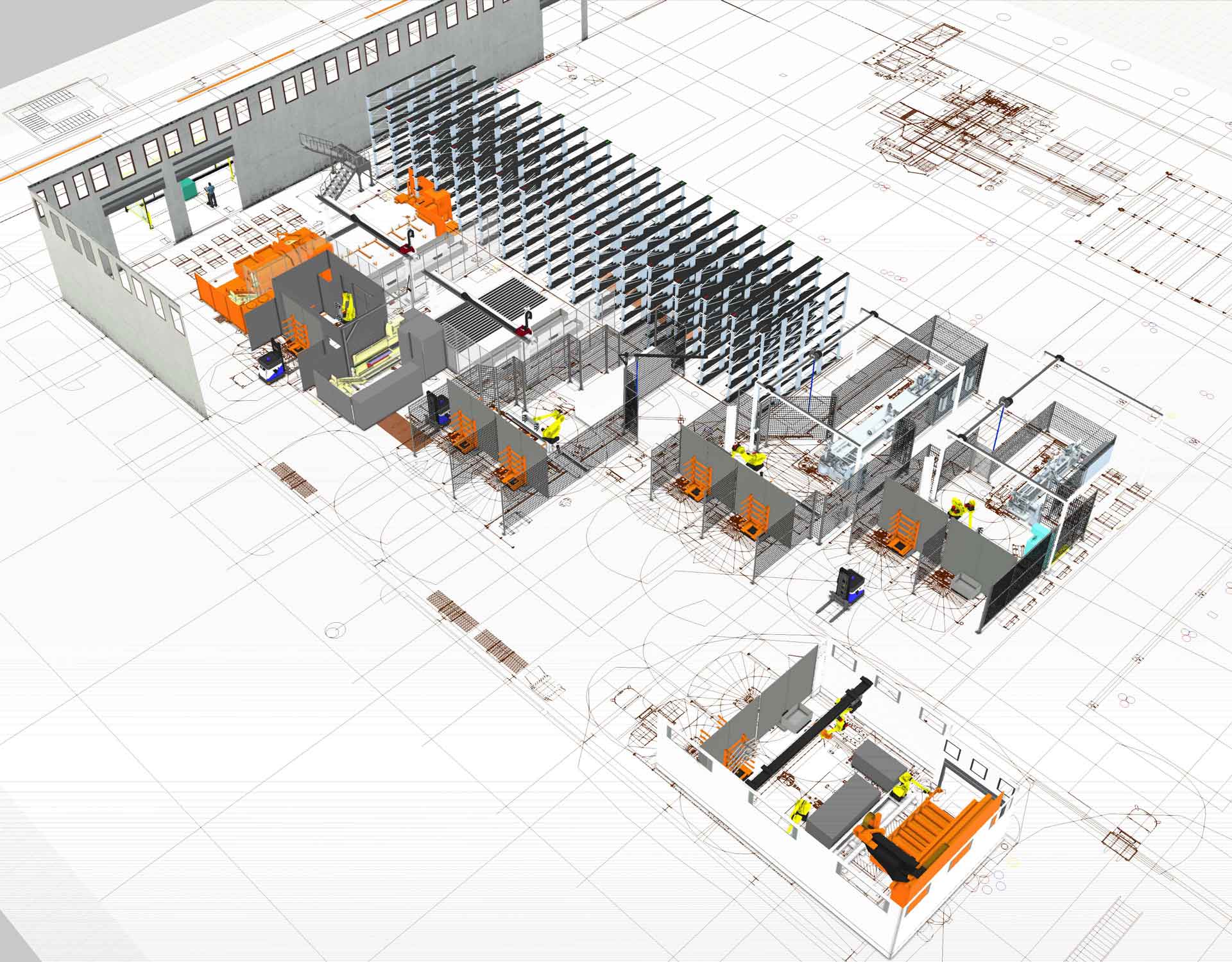 How can the world ensure food supplies for its ever-increasing population in the future? The agricultural sector must supply growing quantities of cereals, fodder crops and other food products. And it must do so under objectives that are in part contradictory – on the one side cost-effective, on the other ecological. These goals can only be achieved with modern agricultural machinery, because only modern technology can ensure good yields at reasonable costs thanks to precise sowing, targeted fertilization, and optimum plant protection.

AGCO is one of the world’s leading manufacturers of tractors, combines and other agricultural machinery sold under well-known brands such as Fendt and Massey Ferguson. The Fendt plant in Asbach-Bäumenheim, Bavaria, produces driver cabins for tractors and self-propelled harvesting and crop protection machines. Nearly 1,200 employees manufacture, weld, paint and assemble cabins of various designs at this facility. Fendt cabs for tractor assembly are delivered Just-In-Time and Just-In-Sequence, i.e. the parts are built in the same sequence as they are needed on the assembly line at the Fendt plant in nearby Marktoberdorf.

The essential part of a driver’s cabin is a structure made of bent and welded tubes. The tubes are automatically supplied from a storage system and fed to a laser cutter. The tubes are then passed on to bending machines, loaded and unloaded automatically by robots. As the last step before welding, the tubes are cut to their final contour by a 3D laser; this is also done automatically. After this, the tubes are welded together to form the cabin frames. The latest welding technologies and innovative welding robots are used for this. Thanks to precise cutting and modern welding processes, it is possible to manufacture ergonomic cabins with curved windscreens.

AGCO’s engineering department is responsible for process optimization and procurement of manufacturing equipment. They wanted to optimize robot sequences and make improvements to individual cells in the tube processing workflow. The tubes are processed by a total of six interlinked systems with a high degree of automation. Previously, to carry out such investigations and evaluate possible improvements, production had to be stopped, which resulted in high costs. Therefore, the engineering department looked for a better alternative.

It was decided to model the rather complex production equipment and workflow as a digital twin. The digital twin improves processes, optimizes the production cells and simulates the improved workflows. The digital twin also provides a basis for discussion for future optimizations, in case further activities in a cell should be carried out by the robot.

AGCO’s manufacturing engineers found the solution in the 3D factory simulation software from Finnish solution provider Visual Components. Visual Components simulation can be used to design and optimize complete manufacturing systems, including offline programming of robots. The software simulates the entire manufacturing process and the smooth cooperation between robots, laser cutting and tube bending machines. The simulation allows non-productive times to be minimized and issues such as robot accessibility and collision avoidance to be investigated.

The result of the simulation was very satisfying. For example, we were able to carry out reachability studies on some equipment that we previously couldn’t have done without a production stop. And we were able to realistically analyze the cycle times that could previously only be estimated.

Norbert Pritzl from AGCO, who was responsible for the project, says: “In the first step, it was not important to model all the systems in every detail. Important were only those machines that we thought needed to be modified. The result of the simulation was very satisfying. For example, we were able to carry out reachability studies on some equipment that we previously couldn’t have done without a production stop. And we were able to realistically analyze the cycle times that could previously only be estimated”.

The project was gradually expanded as AGCO’s engineers learned more about the possibilities of the Visual Components software. They started with a small area that they wanted to optimize and gradually rolled out the simulation across the entire automated equipment. And in the future, other areas of manufacturing will also be optimized with Visual Components’ simulation solution.

When introducing a new software solution, it is usually expected that dealing with the yet unknown tool will pose a certain challenge. But not in this case, because the good communication and training received from Visual Components service department helped the employees a lot.

The extensive component library supplied was also immensely helpful: almost all the robots and other equipment used in the pipe bending, cutting, and welding process were already available in the library. If components were not available, they were either improvised or modeled in the CAD system and then imported to Visual Components. It is very helpful here that Visual Components has interfaces to a large number of CAD systems.

“With Visual Components, we can run through scenarios in our production process that previously could only be accomplished with a production shutdown and through extensive testing on the production line,” says Pritzl of AGCO. “This also allows us to accurately model and simulate new concepts so that we can use them to obtain quotations, for example from equipment manufacturers. This saves us a lot of time in project management. In the past we had to try to reach a common consensus with many on-site meetings, elaborate presentations, and detailed descriptions. Visual Components makes it much easier for us to communicate with international equipment manufacturers”.

With Visual Components, we can run through scenarios in our production process that previously could only be accomplished with a production shutdown and through extensive testing on the production line.

The feedback within the company regarding the possibilities of Visual Components has been very positive; many employees in the engineering department have been waiting for such a tool. It is also a great benefit for the suppliers of production equipment, as they can understand more easily what the requested equipment is supposed to do.

Will AGCO continue to use Visual Components solutions in the future? Norbert Pritzl has definite ideas: “We will use Visual Components in other projects as well. We are currently working on projects such as a layout for a new welding hall and the optimization of assembly. We now can quickly and easily visualize and simulate an optimized concept. This will lead to many more projects and thus to further optimization in our production”.

The state-of-the-art automation in manufacturing guarantees the perfect quality of each individual tractor cabin at the highest level. Visual Components’ solution has played a major role in helping to manufacture cabins for tractors and other agricultural machinery with outstanding quality at competitive prices.