If more green energy is to be generated from the sun and wind, electricity needs to be stored for dark and windless times. To meet this challenge, innovative solutions are emerging.

“There is hardly a meeting in which I don’t have Visual Components open on my laptop. Whether I’m sketching out an initial idea with new customers or simulating and optimizing an existing system – Visual Components helps me to create a common understanding.” 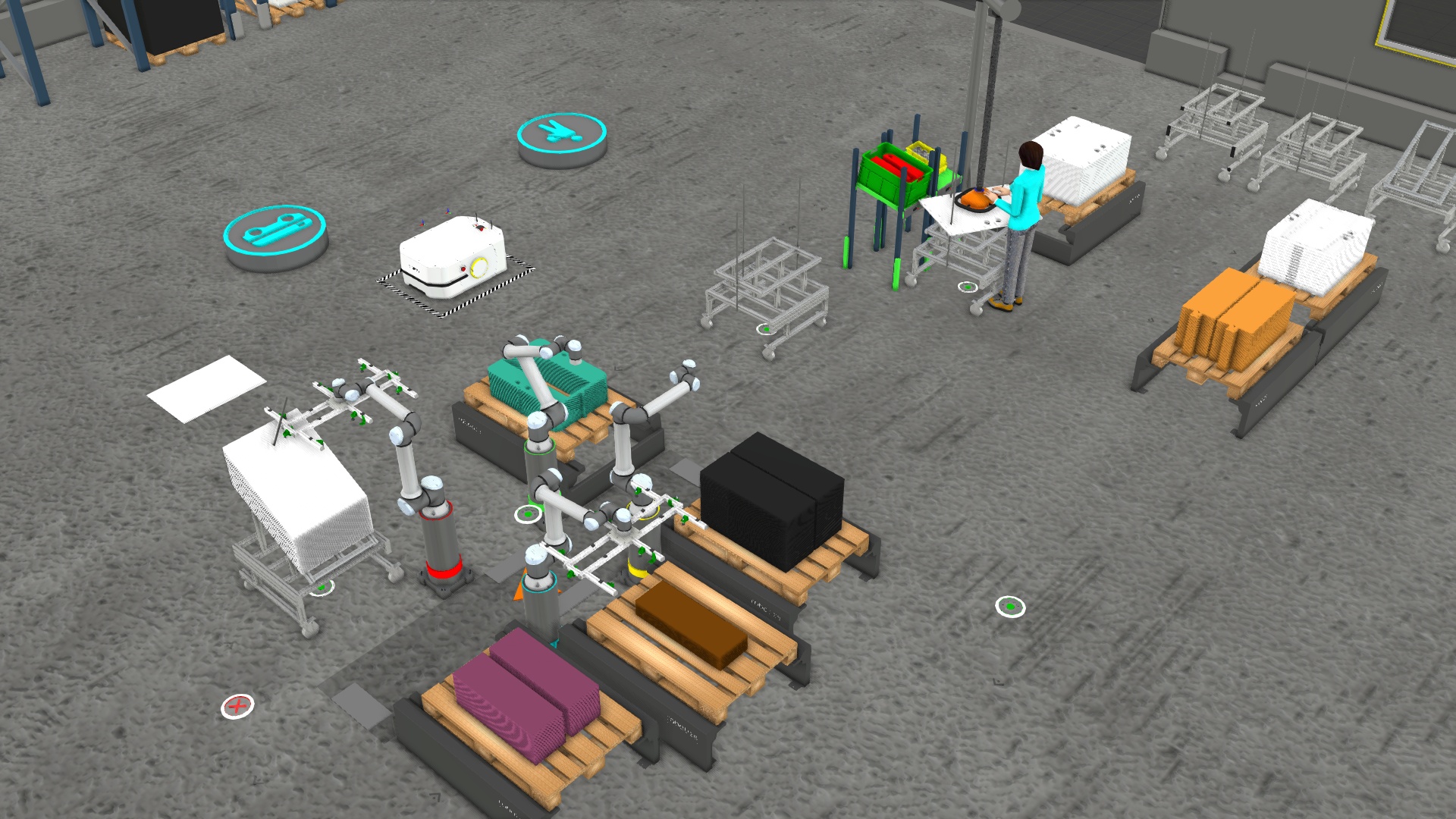 JenaBatteries GmbH from Jena in Thuringia, Germany, is developing redox flow batteries; these large-scale storage systems can be used to buffer fluctuations in the generation of renewable electricity. An important advantage of these flow batteries: They are metal-free and do not require lithium, manganese, or cobalt. They store green, clean energy without exploiting nature and inhumane labor conditions in developing countries. JenaBatteries’ flow batteries offer large industrial customers from 100 MWh upwards a safe and scalable storage solution, thereby making a significant contribution to the fight against climate change.

JenaBatteries wanted to enter the market rapidly, therefore product development and production planning had to go hand in hand. JenaBatteries needed specific expertise in the field of manufacturing and therefore sought advice from ECOSPHERE Intralogistics GmbH, a company that supports manufacturers in production planning, intralogistics, and automation.

JenaBatteries wanted to set up automated production for one of the essential components of the batteries – the cell stack. This stack consists of different materials stacked on top of each other; in total, over 300 individual parts for each cell need to be stacked and then compressed.

How can production be optimized?

At the beginning of the project, different approaches for production and assembly were designed. In addition to technical feasibility and cost, many other questions also needed to be answered: How much floor space is required? How can the machines be optimally arranged? What is the best material flow? Is the reach of the robots sufficient? How can the cycle time be reduced to achieve the required number of stack units? How can production be made more sustainable? And how can production be scaled up at a later stage to meet growing demand?

All these questions can only be answered with a digital factory model. ECOSPHERE Intralogistics has chosen the factory simulation software from Visual Components. With Visual Components, the company can create virtual models of production cells and complete factories. All questions such as space requirements, machine arrangement, material flow, intermediate storage, cycle times, quantities, etc. can be answered on the computer.

Alexander Schiffer, Managing Director of ECOSPHERE Intralogistics, talks about his experience: “There is hardly a meeting in which I don’t have Visual Components open on my laptop. Whether I’m sketching out an initial idea with new customers or simulating and optimizing an existing system – Visual Components helps me to create a common understanding.”

An extensive library of factory components is included

Visual Components is one of the world’s leading solutions for 3D factory planning and simulation. The software comes with a library of factory components; this allows production facilities to be easily designed, planned, and simulated. Factory planners can create “digital twins” – for small production cells as well as for complete factories; such a digital twin enables production planning, optimization, and even virtual commissioning.

The headquarters of Visual Components are in Finland, but the software is used worldwide in many industries, from mechanical engineering and the automotive industry to the packaging industry and logistics. Purchase or subscription is affordable even for smaller companies since different versions of the software are available.

The first step in the battery cell production is a manual pre-assembly. Here an employee places some components on a workpiece carrier trolley and assembles the first parts. The trolley is then moved to an automated assembly station, initially by hand, in the future by a mobile robot. In this station, several robots assemble more than 300 components of the battery stack. After that, the stack moves on to a pressing device and then to quality control and final assembly.

Optimization of the process with realistic goods carrier trolleys.

The robot library supplied by Visual Components contains all important attributes, e.g., movement parameters of robots from well-known manufacturers such as KUKA, Universal Robots, and Stäubli. CAD data of the components to be assembled can be imported directly into the Visual Components 3D factory model. This allows analyses like robot reach and collision avoidance to be done very easily in the virtual model.

Exact time and motion simulations can also be done, which allows to reduce non-productive times, minimize cycle times and optimize the entire system. Programming of the robots is done directly in Visual Components; this means the production does not have to shut down for robot programming should changes be made to either products or processes.

The factory model allows a flexible reaction to changes

It was important for Alexander Schiffer from ECOSPHERE Intralogistics that the Visual Components factory model could be easily adapted to the rapidly changing requirements: “This project was not a typical mechanical engineering project with exactly defined specifications and requirements. It was rather a dynamic environment where the underlying conditions changed almost every week. But the flexibility of Visual Components’ factory model enabled a very agile and flexible collaboration between JenaBatteries and ECOSPHERE.”

As the battery cell was still under development at that time, a production system had to be planned that could be flexibly adapted to changing components and processes: “We had to keep all core components of the machine as modular and flexible as possible. We had an optimal picture of the finished plant in mind and also started component development early on, such as the workpiece carrier trolleys. They are initially moved by hand but are already prepared for later automation.”

Saving a lot of money with factory simulation

Visual Components’ factory model was also used to create very informative images for management. Philipp Hammans, CEO of JenaBatteries GmbH, reports: “The visualizations by Visual Components helped us enormously in our strategic planning, especially because I could quickly see the current status of the automation project. Especially in our planning phase, such tools make it much easier to make informed decisions.”

Alexander Schiffer: “In addition, thanks to the detailed calculation and simulation with Visual Components, JenaBatteries was able to precisely quantify its future investment. For example, we were able to determine exactly the space required for the production facility. This enabled JenaBatteries to look for a suitable property at an early stage; given the current rising prices, this can save a lot of money.”

ECOSPHERE® Intralogistics GmbH has benefited from a new offer from Visual Components that is specifically available for start-up companies in the DACH region. Young companies can purchase up to three full licenses of Visual Components at very attractive conditions. Low investment costs during the start-up phase of young companies facilitate the purchase. At the end of the 3-year program, the licenses can be converted to commercial permanent licenses. This way, Visual Components’ start-up offer allows young, small companies to optimize manufacturing processes using professional software tools.

Alexander Schiffer is grateful for this opportunity: “Also our customers benefit from this offer. In addition to using the tool for factory layout and sales, we also want to offer factory simulation as a service in the future. So, anyone looking for a partner to carry out such simulations is welcome to contact us.”