With a digital twin of a smart factory, a technical college in Nuremberg, Germany makes its students fit for the digital transformation.

“My project group and I think it is a real highlight that professional software is being used in our school to configure a complete production line, teaching the students about Industry 4.0 as well as certain process steps by means of VR.” 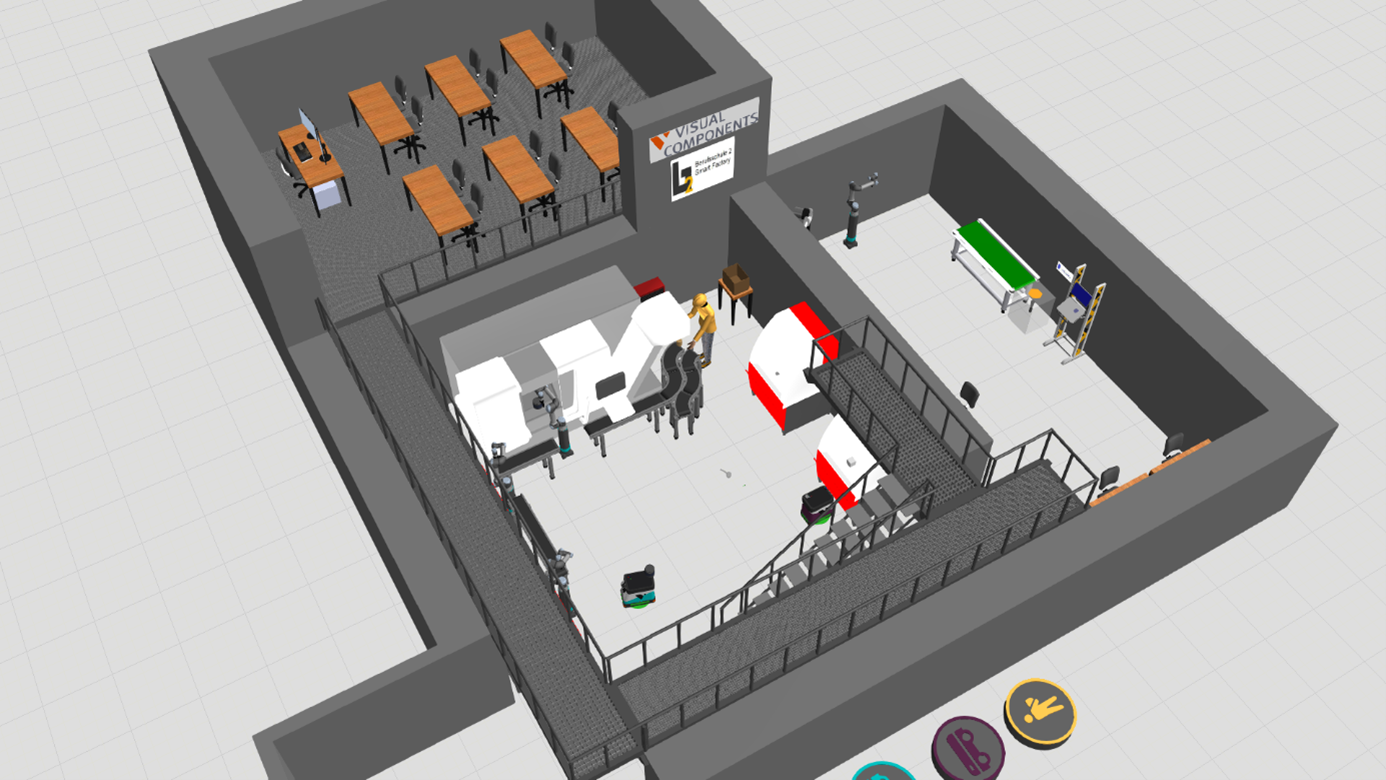 The Rudolf-Diesel-Fachschule Nuremberg is the largest technical school in the Nuremberg-Fürth-Erlangen metropolitan region. The school trains young people to become certified technicians in the fields of civil engineering, electrical engineering, computer science, mechanical engineering, and mechatronics. The training takes place either full-time, or part-time as an evening school. In addition to the lessons, the 400 students are also encouraged to acquire practical skills in challenging projects.

One such project was designing and building a fully automated production line; this was intended to illustrate Industry 4.0. Four students worked together on this project, investing a total of almost 500 hours. The project was carried out using project management tools, with regular milestone meetings where the current status was presented.

Digital twin for the smart factory

A digital model aka “digital twin” was created for the planning of the production line. The digital twin helped not only in arranging the machinery within the intended basement space, but also allowed to plan, simulate, and optimize the complete the “Smart Factory”.

For the creation of the digital twin, the factory planning and simulation software “Visual Components” was chosen. The reasons for this were the performance of the software and its wide distribution in the industry. The school purchased a low-cost classroom license; Visual Components provided free licenses to the students.

Visual Components is one of the world’s leading solutions for 3D factory design and simulation. With Visual Components, production plants can be designed, planned, and simulated using a library of supplied, pre-modeled factory components. The solution can be used to create “digital twins” – from individual production cells to complete factories. Such a digital twin enables optimal production planning and even virtual commissioning of manufacturing plants.

Visual Components is based in Finland; the software is used worldwide in a wide variety of industries, in the automotive and machinery industries as well as in logistics and packaging. Since there are different levels of expansion according to the needs of the customers, purchase or rental is affordable even for smaller companies.

The students learned Visual Components by themselves

The students of the Rudolf Diesel Technical School worked their way into the software completely by themselves. They found numerous very helpful videos and instructions on the “Visual Components Academy” website. This way, they were able to acquire solid knowledge. After that, the first step was to import the existing architectural plans of the basement into Visual Components so that the production line could be set up in the correct environment.

The library provided by Visual Components contains numerous pre-modeled factory components, e.g. robots, conveyors, machines and plants. In this case, only the machine tools had to be modeled. For example, the outer contours of the Emco Mill 105 and DMG Alpha CTX 500 machines were modeled using SolidWorks CAD; the models were then imported into Visual Components via its CAD interface.

After that, the two lines of the production line were set up virtually. On line one, a Robotino, a mobile robot system from Festo Didactic, loads an Emco Mill 105. All key attributes, such as the robot’s movement parameters, are stored in the library supplied by Visual Components. This makes it very easy to perform analyses of the robot’s reach on the virtual model.

After milling is done, the workpiece is placed on a conveyor belt by a UR5 robot from Universal Robots. At the other end of the conveyor belt, another UR5 is waiting to load the workpiece into a DMG alpha CTX 500 lathe and unload it again after the turning operation is complete. On line two, another Robotino loads another Emco Mill 105 with the workpiece and also places it on a delivery conveyor after machining.

Detect and avoid problems with simulation

The digital twin also helped to get a better idea of how the plant would fit into the given space, i. e. to check if there was enough space for the machines and their operation.

Examination of the digital model revealed that a planned gallery could not be built as planned – but the plan could be modified in time. In addition, the original planning included tables in the machine room. Again, the digital twin showed that the tables would not have fit in the room, so they were removed from the design. These shortcomings, which were discovered early on, could be corrected early enough before the real implementation thanks to the digital twin.

Virtual reality is not only an intense experience but also sets new standards in product development and factory planning. VR goggles are used to teach the students about Industry 4.0 as well as individual process steps in manufacturing. For this purpose, the school provided an HTC Vive Pro. Thus, the plant can be used in conjunction with virtual reality for training purposes.

Lukas Gillner, one of the mechanical engineering students at the Rudolf Diesel School is very enthusiastic about this:

“My project group and I think it is a real highlight that professional software is being used in our school to configure a complete production line, teaching the students about Industry 4.0 as well as certain process steps by means of VR.“

Very satisfied with the outcome of the project

The aim of the project was to deliver a comprehensive, interdisciplinary task, which is to be done in a team, according to professional requirements. The focus of the project is the development of professional competence. With this project, the students need to prove that they can solve a problem independently and purposefully. Solution proposals were to be systematically developed, evaluated and concepts developed. As project members, the students worked with project management tools and they applied teamwork methods.

A role model, also for other schools

The Rudolf-Diesel-Fachschule owns several classroom licenses of Visual Components, which are regularly used in class. In the “Digital Transformation” class the school offers a module for getting to know and trying out the Visual Components software. Visual Components will also be used for further project work in the coming years.

Education and training are key prerequisites for maintaining and expanding the competitiveness of industry in Europe. This applies in particular to the skills of engineers and technicians who need to develop and manufacture innovative products. For this, however, not only knowledge must be taught, but enthusiasm for innovation and technical change must also be awakened. The Rudolf Diesel School in Nuremberg has shown how this can be done with the Visual Components project. Strongly recommended for imitation!