SAMSYS ProFeeder in Visual Components: Save time and money on your projects.

Learn how Visual Components enables SAMSYS to build a virtual model of the entire production cell that effectively answers all the questions such as reachability, positioning accuracy, possible cycle times, collision avoidance, easily and quickly.

“We use Visual Components for all projects that require a feasibility analysis or visualization, e.g., for sales. A picture is worth a thousand words – so we can offer our customers a much better idea of their planned facility. And our customers react very positively. They can now run their machines unmanned for at least one shift – and also make money while they sleep.” 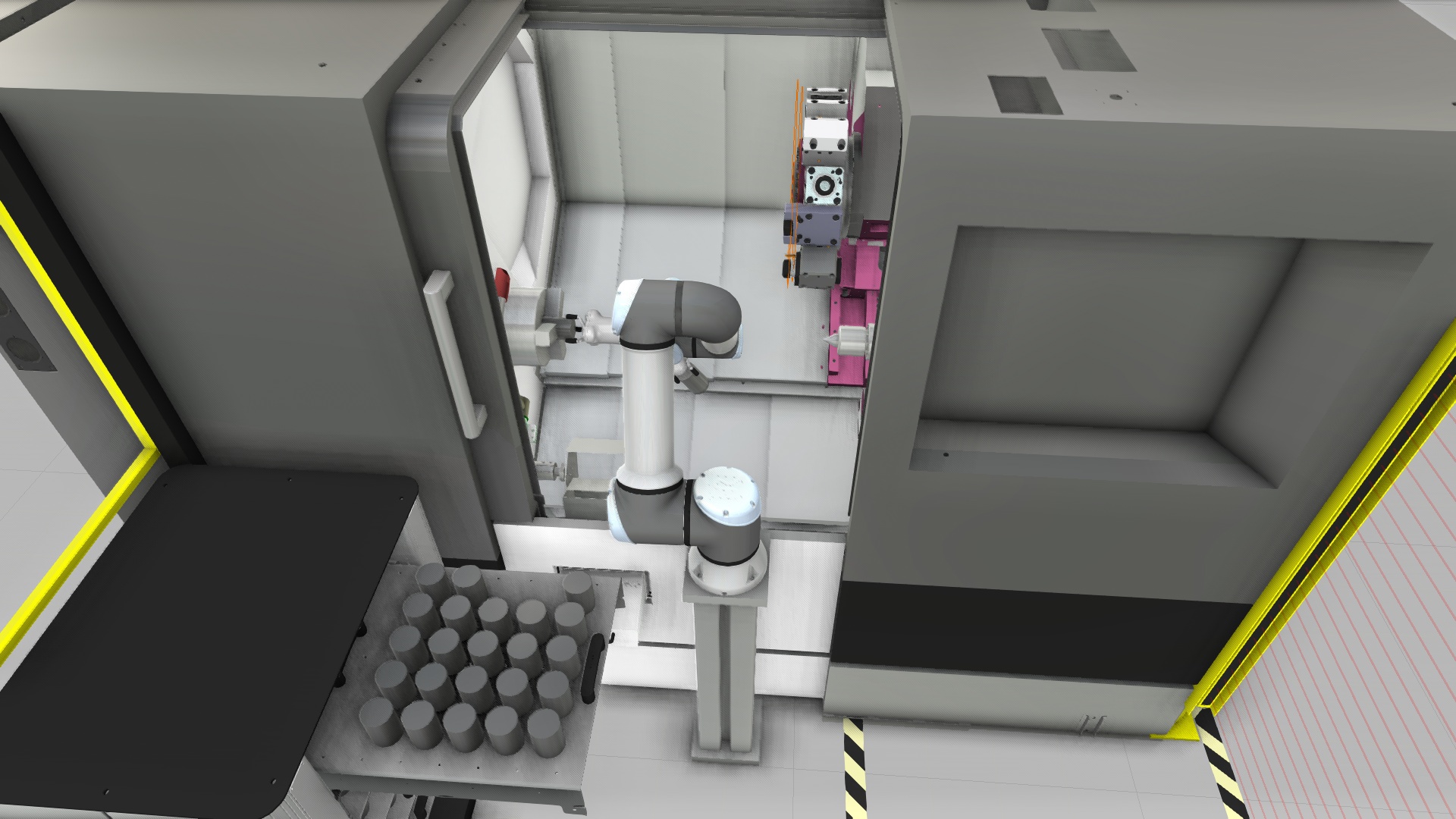 Production with machine tools is all the more economical the longer the machines run – ideally around the clock. This is only possible if lathes or milling machines are loaded and unloaded automatically. In addition to better utilization of the equipment, this also provides other benefits, e. g. higher quality thanks to more stable operations, lower personnel costs, and relieving employees from monotonous work.

Some machine tool manufacturers offer loading and unloading with robots as an additional option. But in practice, most loading situations are different, so some companies have specialized as system integrators in automation around machine tools; they offer solutions that are modular and perfectly adapted to their customers’ situations.

Excellent examples of this are the EasyRobotics ProFeeders from SAMSYS, a dynamic company from Alzey (Germany) that offers innovative products for robot pick-and-place applications. The ProFeeders are basically cabinets with drawers; the system is completed by robots mounted on the cabinet or on a separate platform. The drawers contain the workpieces to be machined; they are placed in the chuck of the machine tool by the robot and removed again after machining and placed back in the drawers. Thus, the ProFeeder allows an unattended third shift – you can earn money while you sleep, so to speak.

There are three models: ProFeeder Compact, ProFeeder Flex, or ProFeeder X; each of these products is a customer-specific solution. Depending on the machine tool, size, shape, weight, and a number of workpieces, the robot and gripper must meet different requirements in terms of reach, load-bearing capacity, and accuracy. The positions of the ProFeeder and the robot in relation to the machine must be precisely optimized in each case. This task was previously done manually, which took a lot of time.

Visual Components for the optimal design of the production line

Jo Braun, as Managing Director of SAMSYS also responsible for product development and marketing, found a better and faster solution – the factory simulation software from Visual Components. Visual Components enables SAMSYS to build a virtual model of the entire production cell. It answers all questions such as reachability, positioning accuracy, possible cycle times, collision avoidance, easily, quickly, and precisely on the computer.

Jo Braun shares his experience: “We first used Visual Components for a feasibility study. It enabled us to ensure that the configuration of the machine tool, drawer system, and robot met all the customer’s specifications. Finally, we were also able to show the customer a simulation to illustrate what his system would look like.”

Visual Components is one of the world’s leading solutions for 3D factory design and simulation. With the solution, factories and production plants can be designed, planned, and simulated using a library of supplied predefined factory components. Visual Components can be used to create “digital twins” – not just of individual production cells, but even of complete factories. Such a digital twin enables production optimization and even speeds up the virtual commissioning of plants along with their control systems.

The software is being used worldwide for more than 20 years in various industries, from the automotive industry and mechanical engineering to logistics and packaging. Depending on their requirements, customers can use different levels of the software, either by purchasing or renting; this makes the software affordable even for smaller companies.

The robot library supplied by Visual Components contains all essential attributes, like the motion parameters of robots from leading manufacturers such as KUKA, Universal Robots, Stäubli, and many more. The CAD model of the ProFeeder Compact was imported directly from the CAD system into the 3D model in Visual Components. This allowed SAMSYS to easily perform, on the virtual model, analyses of the robot’s reach and avoid collisions. So, the ProFeeder could be placed accurately, and the robot could be positioned optimally between the ProFeeder Compact and the lathe.

Visual Components can also be used to perform exact time and motion simulations. Non-productive times can be minimized on the computer model, the lowest possible cycle times can be determined, and the sequence of the production can be optimized. In this way, the economic benefits of the system are convincingly demonstrated to customers. Visual Components can also be used to program the robot so that the system does not have to be shut down for programming when the workpieces are changed.

Save building and testing costly prototypes

Jo Braun reports many advantages: “Thanks to Visual Components, we can meet all the functions and requirements that our customers need. We can also avoid prototyping, which otherwise costs us a lot of money and time. Also, despite its extensive functionality, Visual Components is very user-friendly; this makes it much easier for us to carry out the feasibility studies.”

With its 6 drawers, the ProFeeder Compact is perfectly suited for producing small to medium series. The cell can be positioned next to almost any machine, thanks to its compact size. The ProFeeder Compact can also be quickly adapted to any workpiece. It is either fixed to the floor, or it is mobile and can then be fixed to the machine in a defined way. The robot stands on a pedestal in a position to the machine tool that is also precisely defined.

The drawer system of the ProFeeder is filled outside the robot’s safety enclosure. During operation, the robot opens a drawer, grips a blank with gripper 1, and waits until the machine tool opens the door and sends a signal. The robot inserts the workpiece into the opened machine chuck and then opens its gripper. The robot moves out, the machine closes the door, and starts production.

During machining, the robot with gripper 1 again picks up a blank. When machining is complete, the robot with gripper 2 removes the finished part, positions gripper 1 with the blank in front of the machine chuck, and places the workpiece to be machined in the open chuck. The robot then moves out of the machine, the machine closes the door, and starts production. The robot now places the finished part in the drawer and uses gripper 1 to fetch a blank again. As soon as a drawer has been processed, it is closed; and a new drawer is opened.

SAMSYS’ conclusion: “We use Visual Components for all projects that require a feasibility analysis or visualization, e.g., for sales. A picture is worth a thousand words – so we can offer our customers a much better idea of their planned facility. And our customers react very positively. They can now run their machines unmanned for at least one shift – and also make money while they sleep.”