In this case study, we'll explore the use of automation in manufacturing, particularly as it involves a group project that students in the Industrial Automation course are required to complete at Mälardalen University in Sweden. 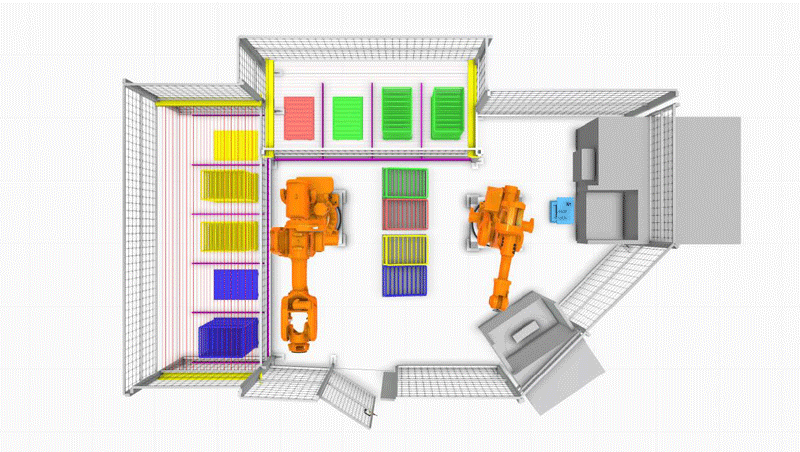 Mälardalen University, or MDH, is among Sweden’s largest and most prestigious universities. With a student body of about 16,000 and course offerings that range from business and health to education and engineering, the educational institute is poised to offer students a well-rounded curriculum in their chosen field of study. One major emphasis at MDH, however, is research — specifically, research to address the societal challenges that humans and civilizations face. And one major area of research focus that has received international recognition includes future energy and embedded systems.

In this case study, we’ll explore the use of automation in manufacturing, particularly as it involves a group project that students in MDH’s Industrial Automation course are required to complete. Visual Components is mainly as part of Industrial Automation course and its simulation for automation capabilities provided a big assist to students in communicating their final proposals as part of this “Sharp Project.” Here’s a closer look:

The goal of the project was to streamline gear production cell by delivering 3600 approved items per week at a GKN ePowertrain plant located in Köping, Sweden. GKN ePowertrain are part of GKN Ltd, the world’s largest supplier of driveline technologies.

The scope of this student project was to redesign a testing cell for gear sets in which a robot is intended to feed material to two machines. The testing cell was initially designed to be automated, but it was later replaced by human operators due to increased output demand from the firm’s customers and the inability of the robot to meet these more aggressive cycle times. Another challenge was the ability to handle the defective products well. It was the students’ job to redesign this testing cell so that it could be both automated and efficient.

“The student project at GKN ePowertrain was about developing a concept to automate the process flow by replacing the operators, feeding the material to the machine with a robot without reducing the number of approved items,” explains MDH student Erik Andersen.

The MDH students started by observing the original testing cell. It consisted of a system comprising two geared parts, which were designed to come together within the testing machine and marked with a QR code in the second machine. The two parts entered the cell in separate metal baskets, and the robot took each part and placed them into the testing machine. When that task was carried out, the robot then needed to move the parts onto the next testing machine. When it placed the two parts into the marking machine, the robot removed the parts that had received their QR codes and left them in the shared basket.

After numerous visits to the GKN ePowertrain site, conversations with on-site engineers and designers, and careful study of the robots in the testing cell, the students keyed in on three areas in which the automation needed improvement if it were to operate more efficiently and effectively. These three areas were:

Based on what they observed and learned, the students proposed three different means of automating a test cell for gear sets where all three proposals producing over 4000 items exceeding the expectations and original goals of the project. GKN will utilize this study and has planned the implementation of one of the proposals that mainly include addition of another robot in the cell. In this case,

As a result of automating this manual production cell, at least 80% of the time of one operator was saved on this project. Visual Components 3D simulation played a vital role in this nine-week project by visualizing the proposed improvements. Of particular value was the Visual Components robot envelope feature, which allowed the students to visualize the potential reach of the robot in all directions within the cell.

The Value of Working with Visual Components

As noted, no simulations were created of the three production proposals due to the short time frame of the project. However, the visuals that were attained from the proposed concepts were valuable in proving the effectiveness and communicating the students’ work. The students were impressed by Visual Components’ user-friendly interface and how easy the platform was to use. There are plans to continue using it for additional tasks in the future.

In addition to the hands-on industrial experience and freedom the students were granted in assessing the GKN ePowertrain test cell, the biggest reward came from news that the firm planned to implement one of the proposals in their production line.

“We received information about what need they had and how many approved items the robot needed to deliver to be adapted to today’s demand,” says Andersen. “In addition, we were allowed to work freely, which was fun and challenging.”

As a supervisor of this kind of project, it is a very good tool to use Visual components together with the students to discuss potential new layouts. Students can create a lot of concepts in parallel and do not have to choose between them too early in the project.