A look at how students in Coventry University's Electro-Mechanical Engineering use Visual Components' 3D simulation software to carry out factory floor simulation.

“Visual Components is a pioneer in being able to replicate a wide variety of industrial scenarios, starting from creating a production line separating fruits in a box in a warehouse all the way to the production of cars and rockets,” says Dr. José Rodolpho de Oliveira Leo, one of the program’s instructors. “It goes according to the imagination and the ability of the user – there is room for everything.” 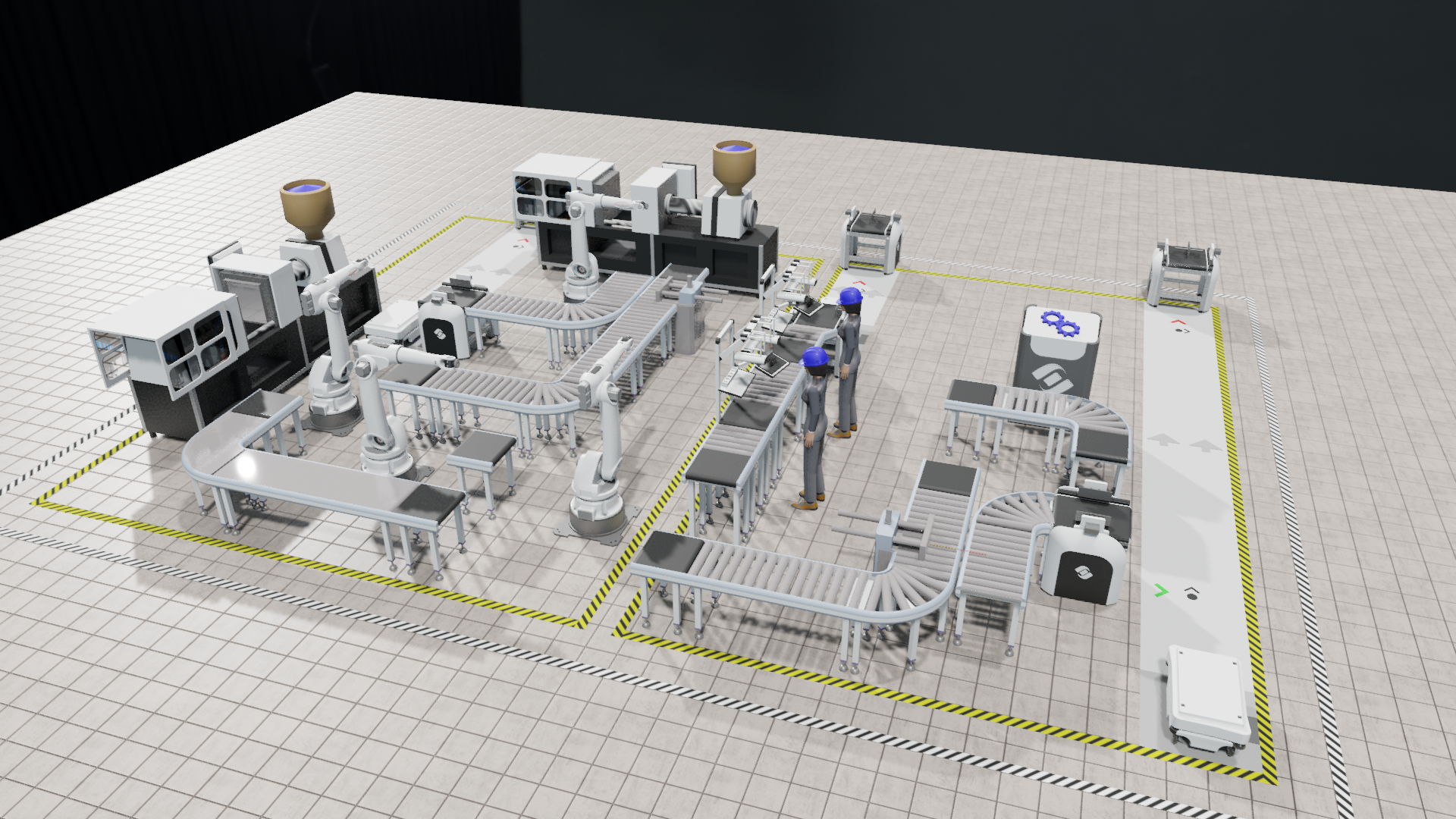 CU Coventry is part of the larger Coventry University Group, and strives to provide an alternative for students when it comes to mechanical and electrical engineering education. One of the highlights of its curriculum is the Electro-Mechanical Engineering Course, which is designed to combine traditional and modern aspects of engineering and introduce students to topics that include control, manufacturing, and robotics.

With a heavy focus on technology and preparing the engineers of today for the challenges of tomorrow, the three-year program covers subjects such as engineering design principles, mechanical engineering systems, mechatronics, systems operations and smart manufacturing technology.

The Smart Manufacturing Technology module is completed during the second year of program study, and challenges students to think about the principles of industrial organization by making use of factory floor layout planning and simulation – and this is where students use Visual Components’ 3D simulation software to help improve performance and productivity in an industrial scenario that interests them.

“Visual Components is a pioneer in being able to replicate a wide variety of industrial scenarios, starting from creating a production line separating fruits in a box in a warehouse all the way to the production of cars and rockets,” says Dr. José Rodolpho de Oliveira Leo, one of the program’s instructors. “It goes according to the imagination and the ability of the user – there is room for everything.”

The Role of Visual Components in the Smart Manufacturing Technology Module

The Smart Manufacturing Technology module is designed to combine classic manufacturing practices with advanced, emerging ones such as Industry 4.0, automation and visual factory design. It’s broken into two parts: the first which involves digital manufacturing and the use of CAD/CAM software to plan manufacturing routes, and the second which challenges students to think about industrial organization and improvements to industrial productivity. It’s this second part where Visual Components software is used.

“When we get into the second part of the module, the first lesson is on Visual Components – then we start presenting them with all the theoretical aspects of manufacturing systems,” says Rodolpho de Oliveira Leo. “Cell layouts, assembly line layout, modular layout, etc. They study the different impacts on production, layout, arrangement, logistics and more. It helps them to understand manufacturing from a much broader perspective.”

According to course feedback, there were many things that students liked about using VC’s simulation software. The majority of students noted the versatility and wide variety of resources the software program offers. They also reported favoring the creative freedom they were presented with when it came to real-world situations. The only downside to using the software as part of this course is that it’s far more comprehensive than what is necessary in the context of the Smart Manufacturing Technology module, notes Rodolpho de Oliveira Leo.

“We’re going to try to incorporate VC in other modules so students can explore the program further,” he says. “Students are really interested in exploring it and learning it more, but they’re limited in terms of time on this module. That’s really the only aspect of the software that is challenging for students.”

Even so, the use of the software in this module prepares them for the all-important third year of the Electro-Mechanical Engineering course where students face even greater challenges.

A catalog with all the major manufacturers across various industrial segments. A friendly, intuitive interface. The ability to replicate a wide range of industrial scenarios.

Those are just three of the reasons why Coventry University selected Visual Components for simulation purposes as part of its curriculum.

“The idea was to bring in a tool that could translate into a more practical activity, something that we could use to study the concept of what the production lines, manufacturing lines, types of factory floor arrangement are – and suddenly, we had the tool to simulate the performance of the factory and the design of the layout,” says Rodolpho de Oliveira Leo. “We were very excited.”

VC isn’t something that students at Coventry University were always privy to using. In fact, it’s only recently become a part of the program as educators looked for new tools to help with student learning. When Conventry educators discovered VC and found that it could adequately simulate the performance of a factory, it was something that they were very excited to implement.

Furthermore, learning to use the software is something that won’t just help students as they progress through the Electro-Mechanical Engineering course, but when searching for a job after completing the three-year curriculum.

“Students are excited about the possibility of simulating the entire world in VC,” says Rodolpho de Oliveira Leo. ” They’re proud to put this on their resume and in their cover letter, as it increases their chances in the job market following course completion.”

For a program with the goal of preparing today’s engineers for the challenges of tomorrow, it’s tools like VC’s 3D simulation software that help students enhance their understanding of course concepts and learn new skills that will only go to benefit them in the real world.