In this case study, we’ll show you how Güdel, one of the world's leading providers of automation, linear, and drive technology; used Visual Components to plan and design an automated solution for the sorting, storage and palletizing of tires from production to shipping.

Imagine that as a tire supplier, you have to deliver 12,000 tires per day to a car manufacturer, just in time and just in sequence – in the exact order in which the cars are assembled on the assembly line and how their customers have ordered – and with numerous different tire types. This is a technical and operational challenge that requires a well-organized interim storage facility and sophisticated logistics in order to manage.

In this case study, we’ll show you how Güdel, one of the world’s leading providers of automation, linear, and drive technology; used Visual Components to plan and design an automated solution for the sorting, storage and palletizing of tires from production to shipping.

The solution that Güdel designed for this customer project was impressive, in terms of both its technology and scale. It included a massive ASRS gantry robot system that could sort, store, and organize a random infeed of tires and retrieve completed sets of tires for delivery. After production, tires arrive in a random order via the infeed conveyor technology to a barcode scanner that reads the barcode of the tire and sends it to the material flow computer. This decides which buffer the tire should go to. The gantry bridge responsible for the buffer then removes the tire and a gripper that moves across the storage area on linear axes and gantries places it on an existing stack of the same type or forms a new stack. For reasons of stability, the stack height is limited to a maximum of 1.6 meters. Within the buffer, which can accommodate up to 8,000 tires, a tire type is temporarily stored until there are enough tires to fill a complete range for transport. As soon as a complete set of tires is completed, the stack is gripped by a gripper and transported to a palletizing unit. In order to achieve the required high throughput of 12,000 tires per day, several grippers are used on several portal bridges. These grippers move at speeds of up to 3.5 meters / second in the Y-axis and accelerations of up to 5 meters / sec2 in the Z-axis.

Although many standard components from Güdel are used in such systems, it is always a customer-specific task, because the size of the hall, the dimensions and weights of the goods to be palletized and the requirements for throughput are different each time. The complexity and the high demands on reliability and throughput make it necessary to use a powerful solution for factory planning and simulation. With Visual Components 3D factory simulation software, Güdel has found an ideal system with which they can design, simulate, and validate their production solutions. 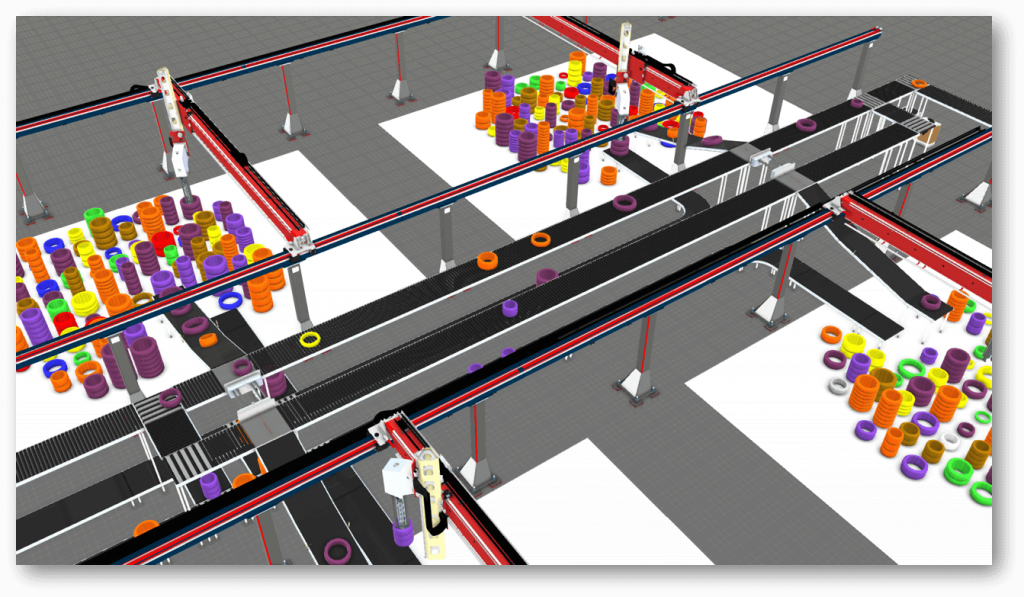 The starting point when planning such a system is usually a 2D drawing that has been coordinated with the customer. The 2D drawing is imported into Visual Components to provide a reference point for the layout, and a 3D layout of the system is designed and configured using components from the component library. In designing this system, Güdel utilized the large library of components available in the Visual Components eCatalog; as well as the numerous components they created for their own user-defined library (Güdel Smart Components such as linear axes, portals and robots). Since the travel paths of the bridges are very dynamic in such projects, the simulation logic is mapped with Python. Güdel has developed its own Python library for this purpose, which is tailored to the “Sorting and Palletizing” division. Thanks to all of these libraries, the planning and design times for such systems can be significantly reduced.

Jonathan Camenzind from the “Software Technologies” department at Güdel AG, together with his colleagues, takes care of the software for complete systems, including the programming of material flow computers and warehouse management systems. For this project, the part of the system that fell within the area of responsibility of Güdel was completely mapped with Visual Components. In this way, the system could be designed virtually according to the specification, statistics could be collected and potential performance problems in the system could be discovered and eliminated at an early stage.

With the help of Visual Components, we created a detailed simulation for this project. This enabled us to precisely analyze cycle times, portal utilization and buffer utilization in various scenarios.

How can Güdel ensure that the system provides the service requested by the customer? This is exactly where Camenzind sees one of the main advantages of the factory simulation with Visual Components: “Thanks to the evaluation of cycle times and utilization of the portal bridges, we were able to ensure that the system meets the customer’s requirements in terms of throughput. The simulation also showed that the number of buffer spaces is sufficient.”

Another important benefit Güdel has realized with using Visual Components is time savings. “Thanks to the Visual Components libraries and the additions by Güdel, the development times for such projects are only a fraction of the time previously required,” says Mr. Camenzind. “Using the smart components in the Visual Components software, for example, I can easily connect the bearings, bridges, infeeds and outfeeds visually. I only spent around 100 hours on the first version of the complete system, including the programming of material flow computers. For further scenarios, around 80 hours were added in the following weeks.” 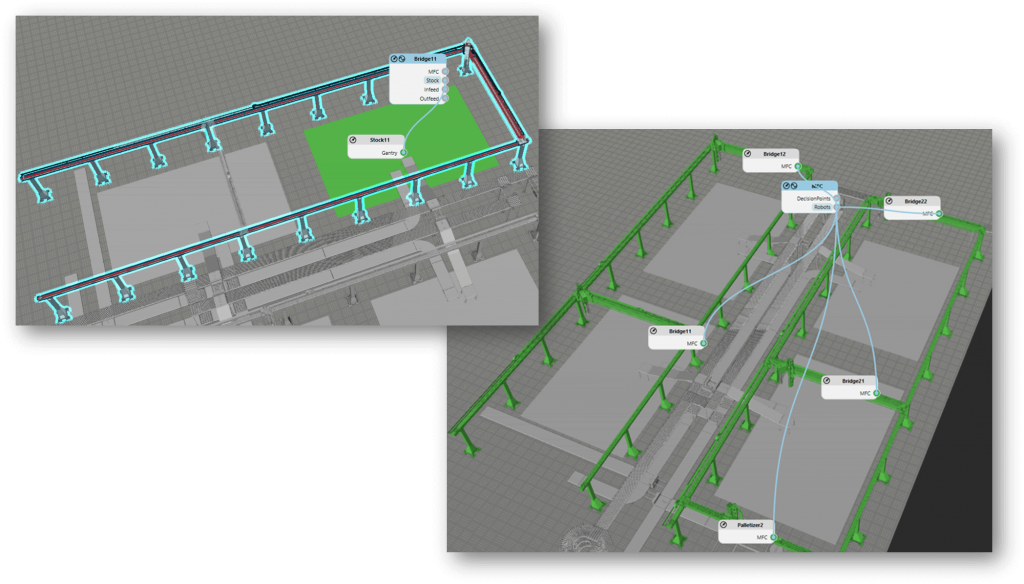 Thanks to the Visual Components libraries and the additions by Güdel, the development times for such projects are only a fraction of the time previously required. Using the smart components in the Visual Components software, for example, I can easily connect the bearings, bridges, infeeds and outfeeds visually.

The customer was also impressed by the solution. “The simulation with Visual Components was viewed very positively by our customer,” said Camenzind. “It increases the customer’s confidence in the system builder when he can see a sophisticated simulation of the planned system. And that certainly also helps to win orders and lay the foundation for further success in the future.”

If you would like to see a similar Güdel system in operation, this video shows a system for storing and sorting complete wheels: 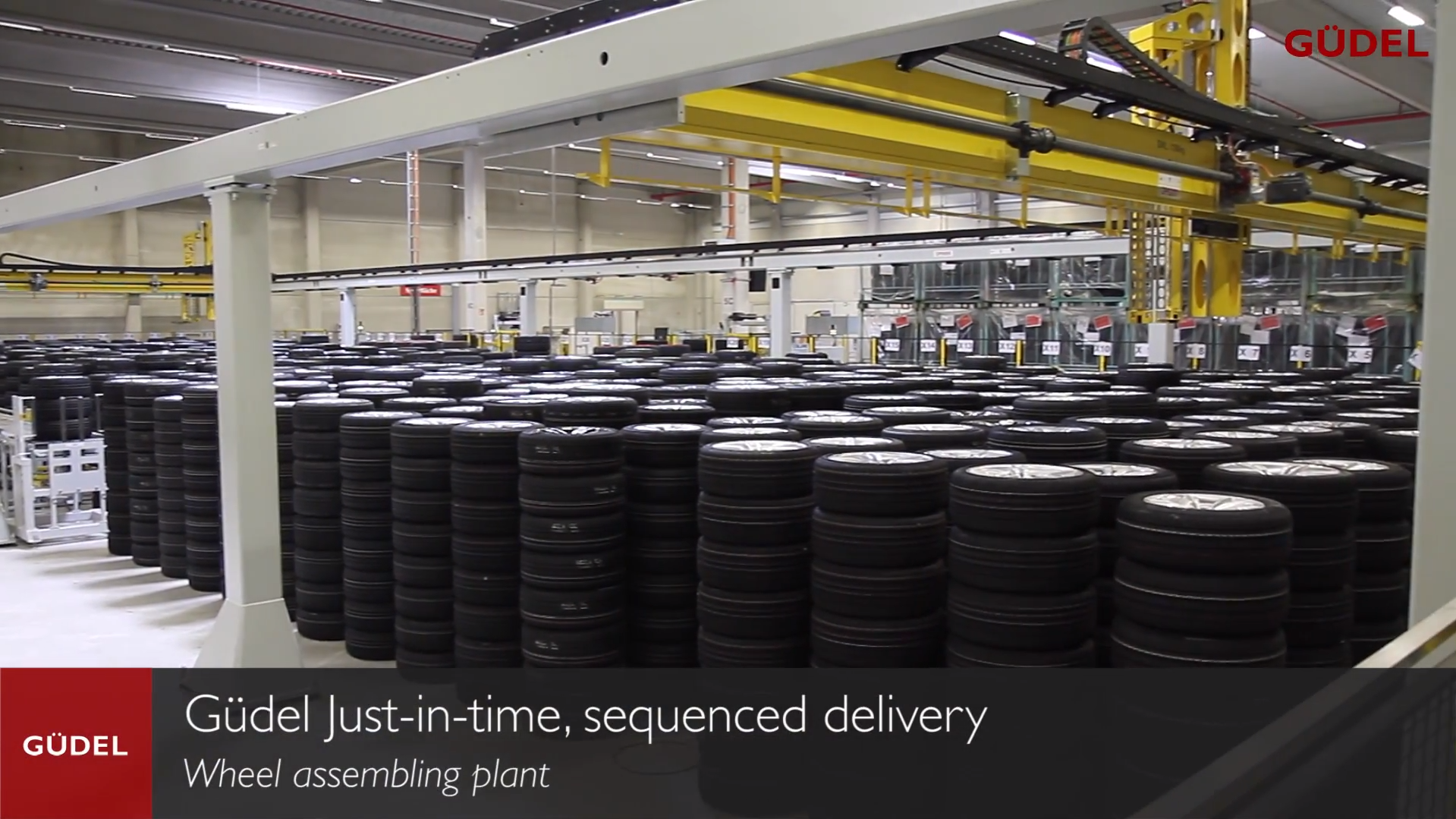 The Güdel Group is one of the world’s leading providers of automation, linear, and drive technology, with its headquarters in Langenthal, Switzerland. The Güdel Group has been family-owned since it was founded in 1954 and employs around 1,200 people worldwide at over 30 locations. Their product range extends from linear guides, racks, pinions and gears to linear axes and portal robots. In addition to a wide range of automation components, Güdel also offers complete systems, such as for the production of components for prefabricated houses, food palletizing, and for the storage, sorting and picking of products of all kinds.

Are you a current student? Request your student trial license here!

In this second video about the FlexLink – Visual Components partnership, we explore some of the key functionalities of the FlexLink Design Tool that enable it as an effective sales tool of FlexLink systems.

FlexLink Case Study: Not just a Platform, a Partnership

In this case study, we explore how FlexLink, a Sweden-based manufacturer of flexible, modular conveyors and industrial automation equipment, partnered with Visual Components to turn their vision for a 3D design and visualization tool into a reality.

In this case study, we’ll show you how Europlacer, the world’s largest independent global supplier of SMT pick-and-place machines, uses Visual Components to design and sell assembly solutions to customers in the global electronics industry.